If you missed the gap year travels at uni like I did, let me tell you multi city breaks are the way to go. A wonderful adventure packed into just over a week and with luxury hotels rather than hostels. Budapest is somewhere I’ve wanted to visit for a while so where better to start off our Eastern European Adventure.

On our first morning in Budapest I went out for a run, first time I’ve ever ran on holiday because that Marathon isn’t getting any further away. It gave me a real feel for the city, just running, looking around and taking everything in. It’s my new way to start a holiday, though maybe just a stroll next time. 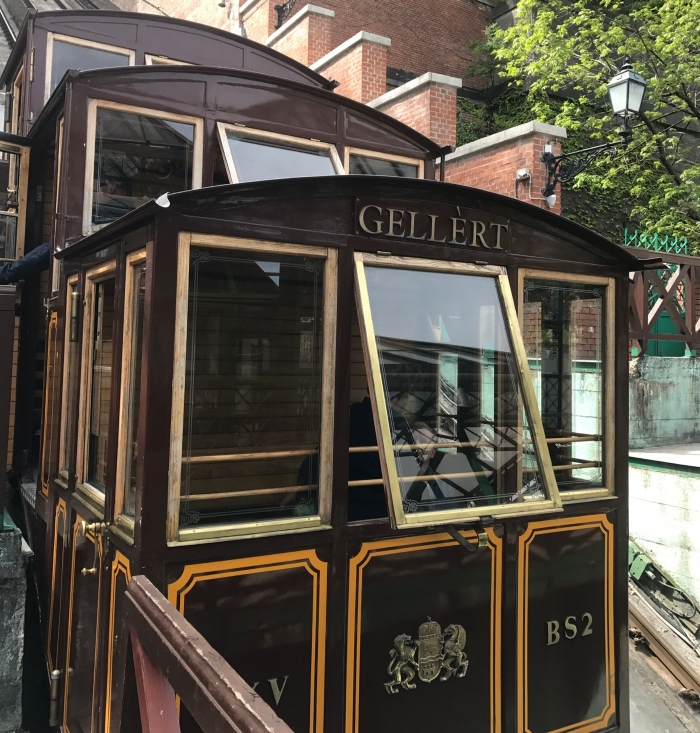 Up on Buda Hill sits Buda Castle and Fishermans Bastion. We wondered across the chain bridge and took the funicular up the hill. The walk up is a bit of a trek and the funicular is fun with a fab view, take the front carriage for the best view. We’re not ones for spending hours on guided tours instead we had a wander around the pretty grounds and took in that view. Fisherman’s Bastion is a short walk from the Castle. With all those arches and towers its quite something to behold.

3. Shoes on the Danube

We came across quite a few monuments to those lost during WWII on our trip, this was one of the most moving. To the memory of the thousands shot and left to fall in the river in 1944-45. Those shot were told to remove their shoes and stand on the edge of the bank so their bodies would fall into the river and be carried away. These sculptures are a very poignant tribute to them. You can find them on the Pest side of the river a few minutes walk from the Hungarian Parliament.

This place is simply stunning. Originally build in 1894 as the European headquarters for a large insurance company, she went through a bit of a tough time during WWII and afterwards. Thankfully in 2001 someone took the time and care to return her to her former glory. Beware the menu is not cheap, we were around £60 just for lunch. But it well worth it to soak in those surroundings and enjoy the live music music while you eat.

Perhaps the coolest thing in Budapest.  Disused and abandoned buildings turned into funky little bars and restaurants, what’s not to love. There are over 20 in the city, in our three days we managed to visit three. First up the original Szimpla for some drinks. A very cool place with a load of bars leading off a central area, a mishmash of furniture, wall coverings etc. All kinda thrown together but in the best way.

One of the best dinners of our trip was in Mazel Tov. Under a canopy of fairy lights with acoustic music played live, we coulda been in an up market restaurant in the west end. Dinner was delicious and a fraction of the west end prices too.

After dinner we popped to Fogas Haz about two doors down. Similar to Szimpla, it has a main outdoor square with bars surrounding it. Fairy lights and an mechanical acrobat it’s quite the place. We sat for hours drinking and soaking up the atmosphere, even if we did feel we brought the average age up by ten years.

Again there are quite a few of these around the city. We only managed to visit Szechenyi on our first day. This is the biggest and found in City Park, with three outdoor pools it was a perfect way to start our trip. Natural spring water, rich in minerals and warm; who cares if the healing benefits are true or not, it is divine. The baths maybe luxurious but take note the changing facilities are not. Make sure you take essentials, dressing gown, flip flops and towel. You can hire a towel but it’s tiny. There’s also a outside bar so a waterproof money pocket is a good idea if you have one. I really wanted to go to Gellert which are stunning Art Nouveau baths but we didn’t have time, will just need to go back.

Because if you can on holiday when can you? Langos are a good hangover cure, fresh fried bread with a tonne of cheese, sour cream and even bacon if you want it. You get these from street carts all over the city. When in Hungary be sure to try some goulash too, delicious beef soup often served in a bread bowl, what’s not to love. I missed out on a Chimney cake though, another reason to go back.

I love hearing from you, let me know what you think Cancel reply

Search Living in a Boxx